Join us as we take a trip down memory lane to check out the start of the ‘Doom’ franchise. 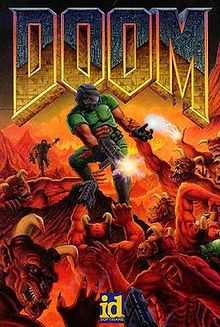 What was it all about?

You know those first-person shooters you love today? Well, ‘Doom’ is their father.

‘Doom’ is the pioneer of first-person shooters. The original. The daddy. The one game that as a kid you could experience serious violence without having your parents shout at you for playing.

It was everything a young child first getting into gaming wanted. It was violent. It was fun. It had blood. It had guns. It was fast-paced and made you jump – all at the same time. It was a masterpiece for the time. Goosebumps!

Gamers play as an unnamed space marine who is sent to Mars for being a naughty boy. Things go horribly wrong at the Martian space base and all hell breaks loose. Our main character, who became affectionately known as ‘Doomguy’, basically has to take on the demonic creatures in order to save Earth. No pressure.

‘Doom’ is one of those games which will live on forever. It is estimated that 20-million people played ‘Doom’ between 1993 and 1995 – which is an astonishing figure, given that gaming was nowhere near as big as it is today. You can still play the game today, and some will even argue that it is still the best ‘Doom’ in the franchise, despite lacking crisp graphics.

Best part about the game?

As mentioned above, ‘Doom’ contained everything you would want as a kid. It was incredibly violent and helluva scary, especially for kids.

You kind of need to experience it for yourself to truly get a feel for what is good about it, and once you do, you will realise that there is very little that can be faulted with the title.

The game in glorious colour…